An example of a promising community learning process is a programme called Phukusi la Moyo, (literally Bag of Life), developed in response to a need for education about maternal and child health in Mchinji District, Malawi. Phukusi la Moyo has been developed through collaboration between communities in Mchinji, MaiMwana Project (a community-based maternal and child health NGO), Mchinji District Health Office (Malawi Ministry of Health), Mudzi Wathu Community Radio station, Story Workshop (a Blantyre-based educational media production group), and the Commonwealth of Learning. 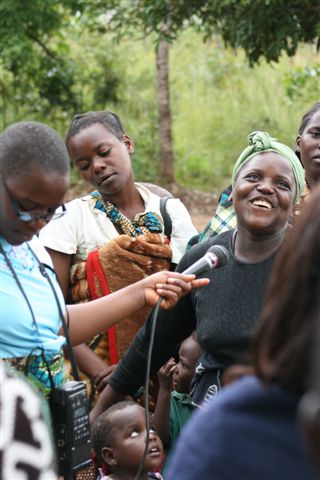 Community learning programmes are about participation and engagement with learners

The name Phukusi la Moyo (Bag of life) comes from a local traditional Chewa proverb: Phukusi la moyo umasunga wekha (everyone should jealously protect their own bag of life). This proverb teaches that everyone is responsible for their own lives and health and should have a full bag of skills, knowledge and experiences, which they can use when needed. The hope is that the radio programmes will be a source from which people living in Mchinji can draw to fill their bags of life and safeguard mother and child health.

Background to the programme

Malawi’s maternal and child mortality rates are amongst the highest in the world. In the past a great deal of work to address high mortality rates has been carried out at health facilities through training of staff, improving quality of services and provision of more resources. However, in Malawi only about half (57%) of women deliver in a health facility, only 57% of women attend the recommended four antenatal care sessions and only one third (31%) of women and children receive postnatal care . As a result, organisations are increasingly working at the local level to develop the capacities of communities to take control of their own health. It is only through a combination of facility and community-based approaches that countries will be able to achieve their MDG targets for maternal and child mortality respectively.

MaiMwana Project has been implementing this combination of approaches in collaboration with Mchinji District Health Office since 2003. Learning from these activities and, more importantly, the explicitly expressed needs of communities in Mchinji has revealed the need for a more specific behaviour change communication strategy to supplement existing activities in the district. ODL through radio has the potential to reach communities with messages that can increase the awareness and change the attitudes of community members in relation to mother and child health. These changes, supported by existing community mobilisation and facility-based interventions, have a great potential to improve mother and child health and reduce mortality.

Mchinji District is one of nine administrative districts in the Central Region of Malawi. Topographically, the Central Region of Malawi is mainly a plateau, over 1000 metres above sea level, and is the country's main agricultural area. Mchinji District lies to the west of Lilongwe, the capital city, and has international borders with Zambia and Mozambique. It covers an area of 3,356 square kilometres and has a population of about 380,000 . The district is divided into eight Traditional Authorities: Dambe; Mavwere; Mduwa; Mkanda; Mlonyeni; Nyoka; Simpasi; and Zulu. The district centre is Mchinji Boma but about 80 percent of the population of Mchinji lives in rural areas. 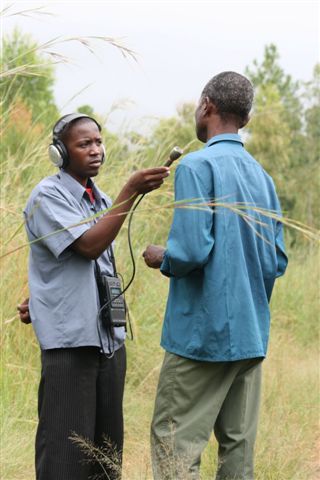 Recording in the community during the programme development workshop

The focus of the learning programme is a weekly 30-minute mother and child health radio show, Phukusi la Moyo, broadcast by Mudzi Wathu Community Radio, which reaches the whole of Mchinji District. Data suggests as many as 80 percent of households have radio sets, making potential access to the learning content high. The total population of the district is approximately 380,000 people. This means that within this total population, over one year, the programme has the potential to reach 15,000 women who will become pregnant in the district and the parents of 125,000 children who will be under age five.

Materials for the first four programmes were also recorded from nearby communities during the workshop and the pilot programme was fully developed and edited – ready for broadcast. A further 13 programmes were mapped out in detail. The programme team also decided on the name and the time of broadcast.

By the fourth day [of the workshop] the Phukusi la Moyo program was now taking shape. The format was known, the name created and the program matrix ready. It was now time for the producers to gather the materials for the first program. They went out to interview different stakeholders. The whole morning was reserved for content collection. The producers visited a nearby village which is host to one of the MaiMwana women groups to record songs and interviews for the first four programs. The signature tune of the program was created by the village women and was also recorded. The producers also interviewed some MaiMwana and district health officials as well as women group representatives. The producers were on their way to producing their first Phukusi la Moyo program. Workshop report, Charles Simbi (Story Workshop)

One of the partners’ objectives is to move beyond “messaging” and a one-way “pushing content” approach towards more interactive and engaged models for local educational programming. The Phukusi la Moyo programme is also training 200 existing women’s groups in the skills necessary to become effective listening and learning clubs. The training draws on the experience of both Mudzi Wathu and MaiMwana Project. Three representatives from each of the 200 groups are being trained in the skills necessary to facilitate discussions about the programmes; facilitate the application of what women are learning to their own situations; and to facilitate group-based learning activities and skills development.

This network of groups covers approximately 350 villages and a total population of 80,000 people across the whole district. The groups were established by MaiMwana in 2005 and have been engaging in a community mobilisation action cycle in relation to mother and child health. This has involved meeting on a regular basis to: identify mother and child health problems; explore the causes of these problems and the ways to prevent and manage them; develop locally feasible strategies to address these problems; implement these strategies; and evaluate the results of these strategies on mother and child health. The activities are facilitated by trained local women who use visual aids such as picture cards and Participatory Rural Appraisal (PRA) methods to stimulate discussions. The groups are now starting a second phase of this cycle where they will identify and try to solve new health problems. The radio programmes provide information to these discussions and are further supported by the visual tools that the groups are using.

Phukusi la Moyo is a promising example of what can be achieved by bringing together communities, knowledge intermediaries, media and public institutions into a community-based learning process. The programme is rooted and focused clearly in community needs and the rights of women and children. It uses media technology to deliver learning content to a geographically dispersed audience in a manner that is cost effective and pedagogically sound. The programme is participatory in design and draws on local voices together with local and national knowledge organisations for the formulation and contextualisation of learning objects. It incorporates off-air elements and complementary media for learner support and moves beyond messaging and pushing information towards engaged learning about health and building healthy communities.

Ian Pringle is Education Specialist for Media, at the Commonwealth of Learning where he directs a portfolio of activities about using media and other ICTs for learning about health and community development.

Healthy Communities (2009-12) is a wide-ranging Commonwealth of Learning initiative to work with health, community development, education and media and ICT groups to develop effective community-based learning for community development, including maternal and child health, HIV/AIDS treatment, conflict resolution, and the empowerment of women and youth. COL is building capacities to design, develop and run appropriate community learning programmes, ones that bring together a variety of partners and draw on local resources, human and financial.

Mikey Rosato is a Research Fellow at the UCL Centre for International Health and Development. He works on MaiMwana Project in Malawi as a Technical Advisor for community mobilization and mother and child health.

MaiMwana Project is funded by Saving Newborn Lives and The Wellcome Trust to explore community based approaches for improving mother and child health and reducing mortality in rural Malawi. The project has been operating in Mchinji District since 2003.

Story Workshop’s programs are real life and story-based; gathered in villages, translated into drama and other media formats, and used to support people in bringing about positive changes to their lives. Role modeling and peer education are important tools, for instance in farmer-to-farmer learning. Instead of yelling messages at people or erecting huge billboards – and repeating those messages a little louder or making billboards a little bigger if messages are not implemented – Story Workshop takes people's own experiences as the starting point for learning and explores alternatives and different solutions for everyday life problems. Story Workshop does not talk about teenage pregnancy, we interview pregnant teenagers. People learn best from people in the same circumstances. If another poor person in another remote village can make a difference so can the audience. There is a limited role for experts in our programs. Story Workshop approach issues in a holistic way: people dealing with HIV may also be poor, taking care of the children of their deceased brothers and sisters, and or have problems in their marriages. Story Workshop adds advocacy programs to its approach whenever there are issues in the field that require changes in policy or decision-making. Programs have a strong human rights angle with an emphasis on gender issues.

Community learning: Perspectives on the role of media in non-formal education with a case study from Mchinji District, Malawi