Art education deals with images, all sort of experienced images. Art education is no longer only concerned with formalist approaches to art works but is reframing its paradigms in the light of visual culture. Teaching visual art education is more multicultural, interdisciplinary and technological than art education in the past. It addresses the range of challenging issues that lead professional artists and students to make powerful visual statements 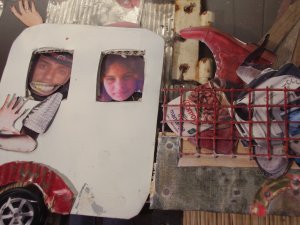 This year (2009) is the European Year of Creativity and Innovation, the EU community has the objective to raise awareness of importance of creativity and innovation for personal, social and economic development, to disseminate good practices, stimulate education and research, and promote policy debate and development. One of the goals is fostering artistic and other forms of creativity through pre-school, primary and secondary education including vocational streams, as well as non-formal and informal education. A great number of young art teachers in Europe do not have a regular job, they don’t always teach in schools or in nice and stable educational settings. They must have imagination and be entrepreneurs and perseverant. Some of them make projects that might be of interest for foundations, museums and social organisations. Paulo D’Alva a young Portuguese film maker and art teacher started by proposing workshops of animation to museums and foundations or working in social community projects.In the last year he worked in a film making workshop in the gipsy community of ‘Rua da Baralha’ , he was invited to make the workshop by a Foundation involved in the social integration of gipsies. He helped children and young participants from the community to produced an animated film telling their daily life: ‘Carro Preto Carro Branco’ (Black Car, White Car). The film tells us a story of the romani guy who lives six days per week in a black car collecting and selling scrap metal waiting for the nice Sunday trip with the family in the white car. The film received an award by a well know film festival in the country , the authors of the film were proud to see their culture and their identity respected by the other through their art produced in an informal educational setting . In many countries both tangible and intangible aspects of cultures are being lost because they are not valued in the education system , looking at this experience we understand that education must think about their priorities and methods of learning if they want an education to foster creativity, cultural awareness and innovation.