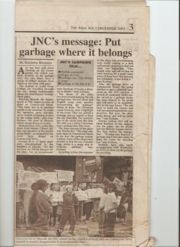 2001- Masrah, constructed a mini amphitheatre in the backyard on a garbage dump of Jyoti Nivas College to construct eco-friendly spaces for creative activities. Yet another workshop with Rafiki, led to a public performance – Mala and the Rain Seed that was performed on this amphitheatre. The play was a fantasy that explore several themes like gender-discrimination, environment consciousness etc. This play was performed in twelve schools and three special schools. The play was followed by a discussion that encouraged people to share opinions and get different perspectives.

Theatre for Masrah is a space to communicate problems and arrive at solutions through the process. The product is a result of the process. Masrah intends to bridge the gap between the actor and the audience. Masrah believes in participative theatre and engages in promoting community theatre which is usually issue-based.

2002 - 03 - Masrah usually compile its own scripts, sometimes adapted from play, short stories and poetry. Bamboos – a play inspired by T S Eliot's Hollow Men knits different abstracts from works of Shakespeare, Marlowe and Eliot to highlight the hollowness in relationships over the years. This was performed at several educational institutes in Bangalore, Mumbai and Pondicherry.

Other plays performed between 2000-2005 were Giant Wheel - a play on the seven deadly sins in daily life, inspired by Dr. Faustus, by Christopher Marlowe, R K Narayan's Swami and Friends, ‘I Am’– a play on gender discrimination, a series of shared experiences on different levels, Free to Be - on free will and independence by exploring different kinds of art forms and the five elements of nature.

2004- In another workshop with Rafiki, Masrah produced Nine is Fine, at least it Rhymes, a self-scripted play. In this play, the performers used the elements of clown theatre with underlying tones of satire and pathos from their personal lives. This experience taught Masrah the therapeutic element of theatre, which is evident in future productions as well. This play was performed for the inauguration of Ranga Shankara, Bangalore.

2004- Masrah performed "Switch" in Alliance Françoise, Bangalore - a play that used in gibberish as the language of the play for Meta – Culture, an integrated conflict management center in Bangalore. The play was an attempt to communicate the process of conflict resolution.

2004-05- Masrah participated in Bangalore Habba, a cultural festival that promotes art, for two consecutive years in partnership with VOICES. A string of short, street plays that covered a gamut of issues like environment, waste management, Deaf issues, women’s issues, traffic management etc. Innovative use of face paint and costumes, music and rhytm, mime and action were implemented. This was a challenging experience as opposed to proscenium theatre where performers had to be street smart, be prepared for spontaneous changes.

2005-06- Masrah has interacted with a Deaf Theatre group called Deaf India, where a new kind of theatre using sign language was explored. As interpreters and to complement their efforts, Masrah initiated to collaborate with them for several street performances in the city. Masrah realized the importance of sharing differences and adapting to needs of the community and thereby engaging the masses to be sensitive to these issues.

2006- Masrah performed Boom Bands[Boombands], inspired by Dr. Seuss’ “Oh the places you’ll go.” The play was an ensemble where a string of shot stories from our past through different stages of life knit together by abstracts from “Oh the places you’ll go.” Further other elements of theatre like mime, music, innovative props, puppets, etc. The play was put together in a month including the production work, and was performed at the Centre for Film and Drama (CFD), Bangalore on 4 th – 5th of February. This performance was taken to Alliance Françoise, Pondicherry and Alliance Françoise, Chennai in June 2006.

2006-07 Masrah did a performance at TCS (Tata Consultancy Services) for their annual employees day in August of 2006. [Shift] was a 20 minute performance on the routine and monotony of a working individual with added comic relief.

Masrah initiated to conduct a two month long theatre workshop that culminated into a performance with Vidyodaya School, a tribal school in Gudlur, at the foothills of Ooty. Masrah interacted with 20 children from this school where basic theatre skills were introduced to the participants. It was studied to measure the impact of theatre in school and education. The children responded positively and practiced theatre regularly. Masrah took the children through the process of scripting, acting and performing to an audience of over a 100 people on the annual Mela of the school on January 14th, 2007.

2007 – Masrah participated in an international training programme conducted by Basic Needs, a Bangalore based NGO that work in the area of mental illnesses. Masrah put up a performance to showcase different mental illness through theatre to differentiate between the symptoms of each illness. Since psychological disorders have overlapping symptoms it was a great challenge to explore ways of presenting them theatrically. The performance titled ,[Kidki] explored the mind and its various states of mind in different situations and circumstances.

2007- Masrah conducted and facilitated a summer workshop with adolescent children from the Sheila Kothavala Institute for the Deaf [SKID] that culminated into a performance that traveled to five Deaf schools in Bangalore. Using theatre as a tool to express and communicate, these children brought issues that they face on a day to day basis. A 40 minute production, titled ‘See Saw’ explored inhibited fears, anxieties, truths, issues they face at school, home and with the general public.

Currently, as part of a larger process, Masrah is conducting another workshop with children between 10- 14 years of age from SKID. This workshop will culminate into a play that will be performed in Centre for Film and Drama on September 8th, 2007. The play explores the questioning phase of childhood and how one can find answers to their questions that are often neglected. The first group is also involved in bringing this play together. Masrah has written the script for the same and is involved the process of ensuring that the children shed their inhibitions, learn to express and communicate through theatre. Further, Masrah is attempting to set up a core theatre group in SKID.

The above mentioned projects with hearing impaired children, is supported by IDCS-India and in association with VOICES, a communication based NGO. The aim of this project is to improve family communications between the parent and the child, teacher-student relationship and encourage the child to express confidently, communication using a new tool – theatre, share and learn from one another.

Masrah is open to take on projects that helps explore new themes, ideas and aspects of theatre that facilitates interaction with different communities and spaces.

2008 – As part of the IDCS project Masrah conducted another workshop with a cross disability group from the Association for People with Disability. These children were older and from different parts of South India, which made it all the more challenging to work with since it was multi lingual as well. The performance explored their memories from the spaces they came from. It was a great learning for Masrah to work with different dialects of Kannada, Tamil and Hindi. This group also performed at CFD - teachers, students from regular schools, parents, youngsters constituted of the audience. Masrah recently brought Pandies, an ‘activist’ theatre group Delhi to perform in Bangalore. We organized their performance at CFD by raising fund for the performance space. Our intention was to engage with like minded people across the country to share experiences and get wider perspectives. Pandies and Masrah had a joint theatre workshop that was a good learning for both groups. Their performances were on child sexual abuse, communalism and child rights. Some important discussions on theatre in education, street theatre, activism, child rights and abuse emerged that was a great importance fro Masrah as the work we are engaged is similar in many ways.

Masrah also was a part of India Theatre Fourm, a drama seminar that took place at Ninasam, Shimoga between 22nd March- 26th March. We hope to take an active role in documentation, coordination, designing, facilitating in future seminars that will be organized. Our presence there opened our understand the politics of theatre from an academic and an experiential point of view. Many active and learned theatre practitioners and academicians were present there. Masrah was actively involved in discussions with people from the forum.

Go Back to our Main Page