(The generally accepted wavelengths of pure colours in the visible region are given in the following table.)

(1) The spectrum in step 2 is a continuous rainbow of colour (all colours are seen) whereas the spectra in step 3 consists of individual lines.

3.(a) In what way are the spectra of the elements observed in procedure step 3 SIMILAR? That is, what do they all have in common?

(1) All the spectra in step 3 consist of individual lines.

(b) In what way are the spectra of the elements observed in procedure step 3 DIFFERENT?

(1) The lines in the spectra occur at different places and have different colours.

4. (a) How did Bohr explain the presence of lines in the light spectrum of an atom or ion?

(b) In procedure step 3, electricity or heat is used to move electrons from one orbit of an atom or ion to a higher energy orbit. What experimental evidence do you have that the orbits in the different atoms you observed in step 3 have different orbit energies? [Hint: read the Introduction.]

6. Based on the spectra you observed in procedure step 3, what TWO ions are present in the unknown mixture?

(1) The elements in the mixture are calcium and strontium.

7. Scientists have accurately measured the wavelengths of every line in the spectra of all the known stable elements (some newly–discovered radioactive elements decompose too quickly to enable their spectra to be measured). Suggest how astronomers could use the light coming from distance stars to find the elements present in the stars. 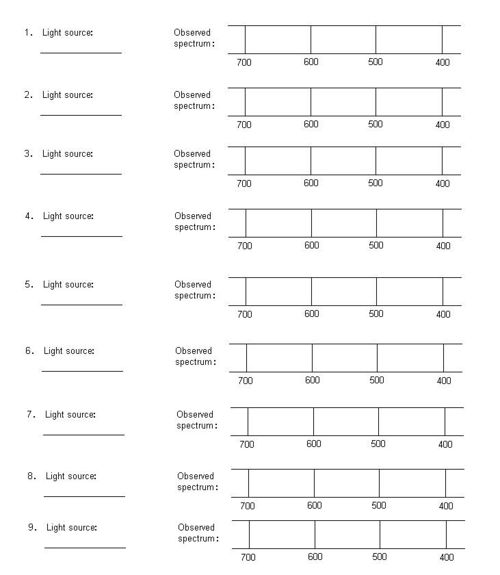