Each element can be identified because it has a unique pattern of lines in its light spectrum. Niels Bohr hypothesized that electrons exist in ORBITS around each atom and each orbit has a unique ENERGY LEVEL. Bohr explained the individual lines in an element’s spectrum of by stating that when atoms receive energy from an outside source (such as heat, light or electricity), electrons move to higher- energy orbits and quickly fall back to their original orbits. As an electron goes from a high energy orbit to a low energy orbit, the electron gives off its excess energy in the form of light. This is the light we see when we look at an element’s spectrum. (See the diagram below.) Bohr hypothesized that because each different element has a different number of electrons it also has different energies for each of its orbits.

HOW A SPECTROSCOPE WORKS
A spectroscope breaks light up into the colours of the rainbow. The part of the spectroscope that actually spreads light into its various colours is called a “GRATING”. A grating is a piece of plastic that acts like a prism and is engraved with about 15,000 parallel lines per 2.5 cm. The diagram below shows how a spectroscope works.

3. Are ALL line spectra identical? Explain your answer.

4. (a) How did Bohr explain the way lines are formed in the light spectrum of an atom or ion?
(b) In procedure step 3, you used electricity or heat to move electrons from one orbit of an atom or ion to a higher energy orbit. What experimental evidence do you have that orbits in the different atoms you observed in step 3 have different energies? [Hint: read the Introduction.]

5. (a) What is the colour you recorded to describe the appearance of lithium ions when they are put into a flame?
(b) What connection exists between one (or more) of the lines in the spectrum of lithium and the colour you observe with your “naked eye”? Explain your answer.
(c) If an element burns to give a bright yellow light and its spectrum has a single line in it, what colour would you expect the line to be in the spectrum of the burning element? At what approximate number of nanometers on the spectrometer scale would you expect to see the line?

6. Based on the spectra you observed in procedure step 3, which TWO ions are present in the unknown mixture?

7. Scientists have accurately measured the wavelengths of every line in the spectra of all the known stable elements (some newly–discovered radioactive elements decompose too quickly to enable their spectra to be measured). What procedure could astronomers use to analyze the light coming from distant stars to decide which elements ARE present in the stars and which are NOT present.

8. Examine the spectra below. The bottom spectrum is a mixture of two or more of the elements above it. Which elements are present in the mixture? 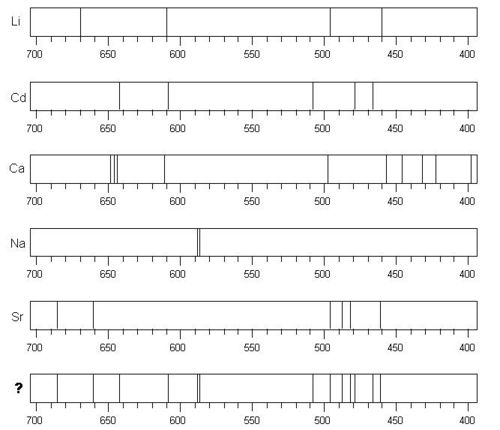 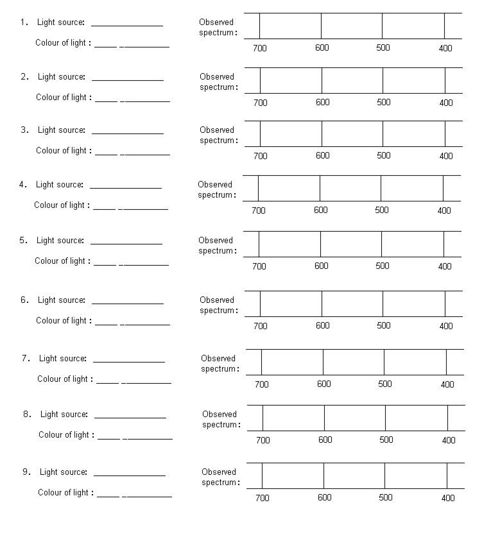