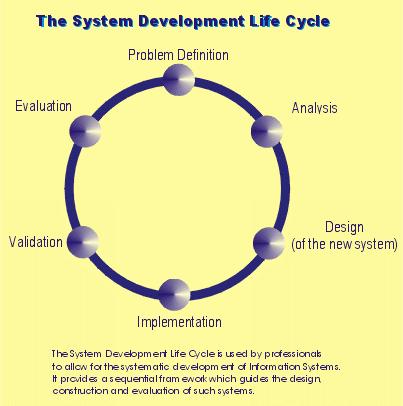 Systems Development Life Cycle (SDLC) is any logical process used by a systems analyst to develop an information system, including requirements, validation, training, and user ownership. An SDLC should result in a high quality system that meets or exceeds customer expectations, within time and cost estimates, works effectively and efficiently in the current and planned Information Technology infrastructure, and is cheap to maintain and cost-effective to enhance.

Computer systems have become more complex and usually (especially with the advent of Service-Oriented Architecture) link multiple traditional systems often supplied by different software vendors. To manage this, a number of system development life cycle (SDLC) models have been created: waterfall, fountain, spiral, build and fix, rapid prototyping, incremental, and synchronize and stabilize. Although in the academic sense, SDLC can be used to refer to various models, SDLC is typically used to refer to a waterfall methodology.

In the 1980s the Structured Systems Analysis and Design Method (SSADM) was based in SDLC. SSADM is a systems approach to the analysis and design of information systems, produced for the Office of Government Commerce, a UK government office concerned with the use of technology in government. Since the 1980s the traditional life cycle approaches to systems development has been increasingly replaced with alternative approaches and frameworks, which attempted to overcome some of the inherent deficiencies of the traditional SDLC.

To generate a high-level view of the intended project and determine the goals of the project. The feasibility study is sometimes used to present the project to upper management in an attempt to gain funding. Projects are typically evaluated in three areas of feasibility: economical, operational, and technical. Furthermore, it is also used as a reference to keep the project on track and to evaluate the progress of the MIS team. The MIS is also a complement of those phase. This phase is also called the analysis phase.

The goal of systems analysis is to determine where the problem is in attempt to fix the system. This step involves breaking down the system in different pieces and drawing diagrams to analyze the situation. Analysts project goals, breaking down functions that need to be created, and attempt to engage users so that definite requirements can be defined.

In systems design functions and operations are described in detail, including screen layouts, business rules, process diagrams and other documentation. The output of this stage will describe the new system as a collection of modules or subsystems.

Modular and subsystem programming code will be accomplished during this stage. This stage is intermingled with the next in that individual modules will need testing before integration to the main project. Planning in software life cycle involves setting goals, defining targets, establishing schedules, and estimating budgets for an entire software project.

The code is tested at various levels in software testing. Unit, system and user acceptance testing are often performed. This is a grey area as many different opinions exist as to what the stages of testing are and how much if any iteration occurs. Iteration is not generally part of the waterfall model, but usually some occurs at this stage.

The deployment of the system includes changes and enhancements before the decommissioning or sunset of the system. Maintaining the system is an important aspect of SDLC. As key personnel change positions in the organization, new changes will be implemented, which will require system updates.

Strength and Weaknesses of SDLC