Primary storage, presently known as memory, is the only one directly accessible to the CPU. The CPU continuously reads instructions stored there and executes them as required. Any data actively operated on is also stored there in uniform manner.

Historically, early computers used delay lines, Williams tubes, or rotating magnetic drums as primary storage. By 1954, those unreliable methods were mostly replaced by magnetic core memory, which was still rather cumbersome. Undoubtedly, a revolution was started with the invention of a transistor, that soon enabled then-unbelievable miniaturization of electronic memory via solid-state silicon chip technology.

This led to a modern random access memory (RAM). It is small-sized, light, but quite expensive at the same time. (The particular types of RAM used for primary storage are also volatile, i.e. they lose the information when not powered).

As shown in the diagram, traditionally there are two more sub-layers of the primary storage, besides main large-capacity RAM:

Main memory is directly or indirectly connected to the CPU via a memory bus, today sometimes referred to as a front side bus. It is actually comprised of two buses (not on the diagram): an address bus and a data bus. The CPU firstly sends a number through an address bus, a number called memory address, that indicates the desired location of data. Then it reads or writes the data itself using the data bus. Additionally, a memory management unit (MMU) is a small device between CPU and RAM recalculating the actual memory address, for example to provide an abstraction of virtual memory or other tasks.

As the RAM types used for primary storage are volatile (cleared at start up), a computer containing only such storage would not have a source to read instructions from, in order to start the computer. Hence, non-volatile primary storage containing a small startup program (BIOS) is used to bootstrap the computer, that is, to read a larger program from non-volatile secondary storage to RAM and start to execute it. A non-volatile technology used for this purpose is called ROM, for read-only memory (the terminology may be somewhat confusing as most ROM types are also capable of random access).

Many types of "ROM" are not literally read only, as updates are possible; however it is slow and memory must be erased in large portions before it can be re-written. Some embedded systems run programs directly from ROM (or similar), because such programs are rarely changed. Standard computers do not store non-rudimentary programs in ROM, rather use large capacities of secondary storage, which is non-volatile as well, and not as costly. 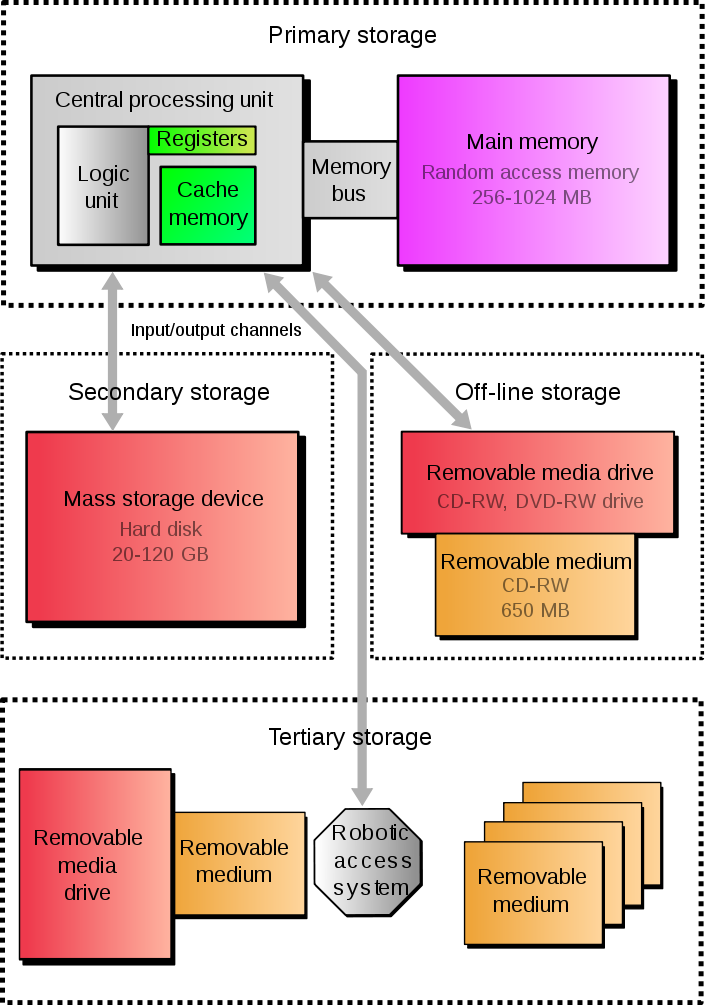