A general purpose computer has four main sections: the arithmetic and logic unit (ALU), the control unit, the memory, and the input and output devices (collectively termed I/O). These parts are interconnected by busses, often made of groups of wires.

The control unit, ALU, registers, and basic I/O (and often other hardware closely linked with these) are collectively known as a central processing unit (CPU). Early CPUs were composed of many separate components but since the mid-1970s CPUs have typically been constructed on a single integrated circuit called a microprocessor.

The control unit (often called a control system or central controller) directs the various components of a computer. It reads and interprets (decodes) instructions in the program one by one. The control system decodes each instruction and turns it into a series of control signals that operate the other parts of the computer. Control systems in advanced computers may change the order of some instructions so as to improve performance.

A key component common to all CPUs is the program counter, a special memory cell (a register) that keeps track of which location in memory the next instruction is to be read from. The control system's function is as follows—note that this is a simplified description, and some of these steps may be performed concurrently or in a different order depending on the type of CPU:

It is noticeable that the sequence of operations that the control unit goes through to process an instruction is in itself like a short computer program - and indeed, in some more complex CPU designs, there is another yet smaller computer called a microsequencer that runs a microcode program that causes all of these events to happen.

The ALU is capable of performing two classes of operations: arithmetic and logic. The set of arithmetic operations that a particular ALU supports may be limited to adding and subtracting or might include multiplying or dividing, trigonometry functions (sine, cosine, etc) and square roots. Some can only operate on whole numbers (integers) whilst others use floating point to represent real numbers—albeit with limited precision. However, any computer that is capable of performing just the simplest operations can be programmed to break down the more complex operations into simple steps that it can perform. Therefore, any computer can be programmed to perform any arithmetic operation—although it will take more time to do so if its ALU does not directly support the operation. An ALU may also compare numbers and return boolean truth values (true or false) depending on whether one is equal to, greater than or less than the other ("is 64 greater than 65?").

Logic operations involve Boolean logic: AND, OR, XOR and NOT. These can be useful both for creating complicated conditional statements and processing boolean logic. Superscalar computers contain multiple ALUs so that they can process several instructions at the same time. Graphics processors and computers with SIMD and MIMD features often provide ALUs that can perform arithmetic on vectors and matrices. 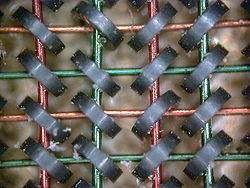 A computer's memory can be viewed as a list of cells into which numbers can be placed or read. Each cell has a numbered "address" and can store a single number. The computer can be instructed to "put the number 123 into the cell numbered 1357" or to "add the number that is in cell 1357 to the number that is in cell 2468 and put the answer into cell 1595". The information stored in memory may represent practically anything. Letters, numbers, even computer instructions can be placed into memory with equal ease. Since the CPU does not differentiate between different types of information, it is up to the software to give significance to what the memory sees as nothing but a series of numbers.

In almost all modern computers, each memory cell is set up to store binary numbers in groups of eight bits (called a byte). Each byte is able to represent 256 different numbers; either from 0 to 255 or -128 to +127. To store larger numbers, several consecutive bytes may be used (typically, two, four or eight). When negative numbers are required, they are usually stored in two's complement notation. Other arrangements are possible, but are usually not seen outside of specialized applications or historical contexts. A computer can store any kind of information in memory as long as it can be somehow represented in numerical form. Modern computers have billions or even trillions of bytes of memory.

The CPU contains a special set of memory cells called registers that can be read and written to much more rapidly than the main memory area. There are typically between two and one hundred registers depending on the type of CPU. Registers are used for the most frequently needed data items to avoid having to access main memory every time data is needed. Since data is constantly being worked on, reducing the need to access main memory (which is often slow compared to the ALU and control units) greatly increases the computer's speed.

Computer main memory comes in two principal varieties: random access memory or RAM and read-only memory or ROM. RAM can be read and written to anytime the CPU commands it, but ROM is pre-loaded with data and software that never changes, so the CPU can only read from it. ROM is typically used to store the computer's initial start-up instructions. In general, the contents of RAM is erased when the power to the computer is turned off while ROM retains its data indefinitely. In a PC , the ROM contains a specialized program called the BIOS that orchestrates loading the computer's operating system from the hard disk drive into RAM whenever the computer is turned on or reset. In embedded computers, which frequently do not have disk drives, all of the software required to perform the task may be stored in ROM. Software that is stored in ROM is often called firmware because it is notionally more like hardware than software. Flash memory blurs the distinction between ROM and RAM by retaining data when turned off but being rewritable like RAM. However, flash memory is typically much slower than conventional ROM and RAM so its use is restricted to applications where high speeds are not required.

In more sophisticated computers there may be one or more RAM cache memories which are slower than registers but faster than main memory. Generally computers with this sort of cache are designed to move frequently needed data into the cache automatically, often without the need for any intervention on the programmer's part. 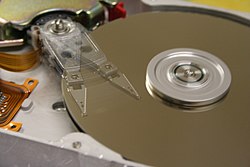 I/O is the means by which a computer receives information from the outside world and sends results back. Devices that provide input or output to the computer are called peripherals. On a typical personal computer, peripherals include input devices like the keyboard and mouse, and output devices such as the display and printer. Hard disk drives, floppy disk drives and optical disc drives serve as both input and output devices. Computer networking is another form of I/O. Often, I/O devices are complex computers in their own right with their own CPU and memory. A graphics processing unit might contain fifty or more tiny computers that perform the calculations necessary to display 3D graphics[citation needed]. Modern desktop computers contain many smaller computers that assist the main CPU in performing I/O.