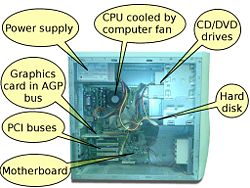 A typical personal computer consists of a case or chassis in a tower shape (desktop) and the following parts:

A case control, and (usually) a cooling fan, and supplies power to run the rest of the computer, the most common types of power supplies are mechanic shed (old) but the standard for PCs actually are ATX and Micro ATX.

Produces the output for the visual display unit. This will either be built into the motherboard or attached in its own separate slot (PCI, PCI-E, PCI-E 2.0, or AGP), in the form of a Graphics Card.

Hardware that keeps data inside the computer for later use and remains persistent even when the computer has no power.

Enables the computer to output sound to audio devices, as well as accept input from a microphone. Most modern computers have sound cards built-in to the motherboard, though it is common for a user to install a separate sound card as an upgrade.

Connects the computer to the Internet and/or other computers.

In addition, hardware devices can include external components of a computer system. The following are either standard or very common.