Module 2 is designed as an active space where you can try out your newly acquired skills in identifying and analyzing arguments. You will be given the opportunity to deconstruct the components of an argument, discuss the structure of an argument and analyze simple and complex arguments.

After successfully completing Module 2, you should be able to:

As part of your induction process into critical reasoning, we would like to introduce you to Socrates, Plato and Descartes, three well-known and famous philosophers, and Thrasymachus, a relatively unknown thinker and exponent of the sophists, who became famous in Athens during the 5th century BC:

As you can see from their pictures, the gentlemen were born quite some time before you drew your first breath. However, their arguments form part of the classic history of the subject field Philosophy and as such you will see them in action below.

What is an Argument?

Tune into a local Talk Radio station and/or watch a debate in a current affairs or new broadcast on TV. Then think about the following questions:

Now we will engage with the transcript of an argument on the topic of Affirmative Action as practised in South Africa. Before we begin:

Edward
All human beings deserve equal treatment, regardless of gender or skin colour. It is a matter of fairness that all people of good will and rational thinking should be able to agree on. Isn’t that what South Africa’s Constitution is all about? Isn’t that what the feminist movement was originally all about? The underlying principle is to treat all people, regardless of gender or skin colour equally. To discriminate against anyone on the basis of gender or race, white males included, is inherently unfair and hence ethically unjustified.
Samantha
So, Edward, you are claiming that all discrimination on the basis of race and gender is inherently unfair. But have you considered the damage caused by past discrimination? No one can deny the South African history of racism and genderism. If the effects of that history were behind us, affirmative action would certainly be unnecessary. But the fact of the matter is that those effects of past discrimination are not behind us. Look around you and tell me who still have the capital and property rights in their hands. If we really believe in justice and equal opportunity, then we have to compensate for the effects of past discrimination on the basis of race and gender.
Edward
Certainly, Samantha, compensatory justice is a noble ideal. But there is a serious flaw in your argument. Compensatory justice for one group brings harm to another, and when the harmed group is not responsible for the plight of the other groups, you are punishing the innocent for the sins of their ancestors. To discriminate against a young white male or a person from a minority group on the basis of what happened before they were born is certainly not fair.
Samantha
I hear what you say, Edward. But I firmly believe that affirmative action is the only way to overcome current racism and genderism. Women remain subject to sexual harassment, and minority groups remain subject to stereotyping that continues to take its toll. You can hear it in casual conversations about women and minority groups and you can study the statistics to discover how bad it is.
Edward
Honestly Samantha, do you really believe that affirmative-action programmes will solve the core problem of discrimination, be it against blacks, whites, women or minority groups? Whatever the purpose of affirmative action, the result is racial tension and increased gender polarisation. A lot of white males and persons from minority groups justifiably feel cheated by affirmative action which denies them the jobs and promotions they are qualified for because they are white males or from a minority group. Affirmative action is thus not bringing us to a colour-blind and gender-blind society but to an increasingly polarised one.
Samantha
You know, Edward, I have never said that affirmative action programmes will eradicate discrimination. My point is that affirmative action is a way to provide compensation for injuries suffered in the past and a way to remove benefits that were undeservedly enjoyed by those who belonged to the dominant group.
Edward
Tell me, Samantha, do you justify preferential treatment programmes solely on the principle of compensation for past injuries?
Samantha
Yes indeed, I do. And I believe it is wrong to think that programmes geared to providing preferential treatment are objectionable, given past practices of discrimination based on racism and genderism.
Edward
But how can you claim this? In my opinion, preferential treatment is nothing but reverse discrimination, founded on racism and genderism. Your argument is intellectually inconsistent in the sense that you now support preferential treatment while you opposed it in the past. Reverse discrimination thus undermines equality because it violates the very idea of equal justice under law for all citizens. What is more, reverse discrimination is prohibited by our Constitution and ethical commitment to equal justice for all.

The following two extracts are examples of arguments in the philosophical sense. The first is from Descartes’s Meditations:

For, since I am accustomed to the distinction of existence and essence in all other objects, I am readily convinced that existence can be disjoined even from the divine essence, and that thus God can be conceived as non-existent. But on more careful consideration it becomes obvious that existence can no more be taken away from the divine essence than the magnitude of its three angles together (that is, their being equal to two right angles) can be taken away from the essence of a triangle; or than the idea of a valley can be taken away from the idea of a hill. So it is not less absurd to think of God (that is, a supremely perfect being) lacking existence (that is, lacking a certain perfection) than to think of a hill without a valley.

The second transcript below is a discussion, recorded in Plato’s Republic, between Socrates and Thrasymachus, on what is just and right:

We will concern ourselves mostly with arguments in the sense of (2) in the sections which follow.

Here is a definition of an argument:

Before we can identify premises and conclusions in arguments, we need to know what is meant by “premise” and “conclusion”.

Let us look at the following argument to explain what premises and conclusions are:

My nose itched this morning. So I am going to be upset later today.

In this argument the first statement is a premise and the second statement is a conclusion. It is obvious that the conclusion is not supported by the premise. There is no relation between my being upset later today and the fact that my nose itched this morning. When we analyze arguments it is important to identify premises and conclusions clearly.

In the online references you will find a detailed discussion on how to identify premises and conclusions in arguments.

The Structure of Arguments

The following is an example of a simple argument, where the premises support the conclusion independently:

Abortion preserves the mother’s rights over her own body. It also prevents the birth of unwanted children. Therefore, abortion should be made legally available.

Let us bracket and number the statements of the above argument:

[Abortion preserves the mother’s rights over her own body]. 1

[It also prevents the birth of unwanted children]. 2

Therefore, [abortion should be made legally available]. 3 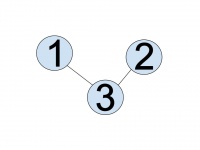 Now, let us take an example of a simple argument in which the premises support the conclusion interdependently.

All human beings are mortal. Sue is a human being. Therefore, Sue is mortal.

Let us bracket and number the statements of the above argument:

[All human beings are mortal.] 1

We can represent the structure of this argument in the following way: 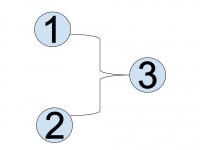 John is a poor student because he spends his time reading comic books and magazines.

This argument requires the further premise:

in order for the premises to provide sufficient support for the conclusion, given that the premises are true. Fully stated, the argument is as follows:

Consider the following passages and then bracket and number the statements, underline the signal words (if there are any) and analyze the following arguments:

Censorship of literature and film cannot easily be enforced. Moreover, the criteria for censorship are either arbitrary or partisan.

Let us bracket and number the statements, underline the signal words and analyze the argument:

[1] Censorship of literature and film cannot easily be enforced. Moreover, the criteria for censorship are either arbitrary or partisan.

Let us bracket and number the statements, underline the signal words and analyze the argument:

[Censorship of literature and film cannot easily be enforced.] 1

'Moreover, [the criteria for censorship are either arbitrary or partisan]. 2'

The argument contains a missing conclusion. The implied conclusion is that censorship is unacceptable. The structure of the argument can then be represented as follows:

[2] Without a good supply of rain food production and industry will suffer. Our future depends on strong agricultural and industrial growth. Therefore, we should do whatever we can to promote good water management.

We have to bracket and number the statements, underline the signal words and analyze the argument:

[Without a good supply of rain food production and industry will suffer.] 1

[Our future depends on strong agricultural and industrial growth.] 2

'Therefore, [we should do whatever we can to promote good water management]. 3'

The structure of the argument can be represented as follows:

In this section we have explored the idea that an argument has a structure. The way in which we evaluate an argument depends, partially, on its structure. Through practice and experience you will become aware of the structure of arguments and you will therefore find it unnecessary to portray arguments in diagrammatic form.

Applying your knowledge and skills to analyzing arguments

You will hardly believe it, but if you have actively participated in your initiation process of becoming a critical thinker, you will now be at the stage where you have the competence to analyze arguments.

Here is a summary of the steps in argument analysis:

An empirical argument asserts that some empirically determinable facts hold. For example, when I say that there is a power failure in town, my claim is either correct or it is not. What makes it correct is some factual state of affairs in the world. The truth or correctness of my claim does not depend on what I feel, believe or value.

A value argument asserts a claim of preference or a moral judgement about right and wrong, good and bad. For example, when I claim that the use of animals in biomedical research is morally wrong, there are no independent facts against which the correctness of my claim can be determined. The correctness or otherwise of my claim depends on argumentation and on substantiated reasons offered in support of my claim.

In this topic we have learned what an argument is; what premises and conclusions are; how to identify premises and conclusions in arguments; how to use techniques for analyzing arguments; and how to distinguish between empirical and value arguments. The basic competence that you have gained in analyzing arguments will also serve you well when we evaluate arguments. This is the focus of our next topic.

Module 2 has five (5) activities. Each of the Journal activities is accompanied by an answer key. Once you have completed the journal entry, you can use the answer key to evaluate how successful you were in meeting the learning objectives. While the assessments are optional, and the grades will not be directly related to whether or not you receive credit for this course, completing them will help you gauge your progress and prepare for the TECEP© exam.

Identify the premises and conclusions in the following arguments:

Consider the following arguments and then analyze them by applying the steps to argument analysis:

Map the following arguments using the methods explained in Module 2:

Identify Premises and Conclusions in an argument: