Atomic Structure and the Periodic Table

Firm evidence for the existence of electrons was not obtained until 1897. In that year, J.J Thomson was investigating the conduction of electricity by gases at very low pressure. At ordinary pressures gases are electrical insulators, but when they are subjected to very high voltages at very low pressures they 'break down' and conduct electricity. When the gas pressure is lowered to 0.001 atm and a potential difference of 5000 volts is applied across the tube containing the gas, the glass container begins to glow. When Thomson applied 15000 volts across the electrodes of a tube containing a trace of gas, a bright green glow appeared on the glass. The green glow results from the bombardment of the glass by rays travelling in straight lines from the cathode until they strike the anode or the glass walls of the tube. Thomson called these rays cathode rays. 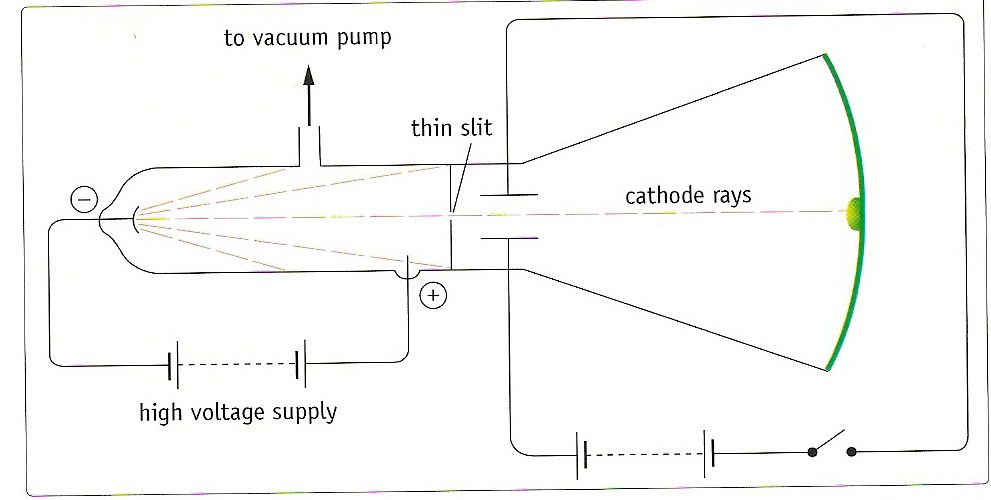 Atoms are made up of three types of subatomic particles called protons, neutrons and electrons.

The mass and charge of these subatomic particles is as follows:

The protons and neutrons are in the nucleus (centre) of the atom and the electrons orbit round the outside in shells (energy levels or layers). So you will often see pictures of atoms that look a little like this:

2.2 The Nucleus of the Atom

How many protons, neutrons and electrons does an atom have?

RULE: The number is neutrons is (mass number - atomic number)

Atoms with the same atomic number, but different mass numbers are called Isotopes.

Stable and unstable isotopes: radioactivity. For example, the most common isotope of hydrogen has no neutrons at all; there's also a hydrogen isotope called deuterium, with one neutron, and another, tritium, with two neutrons.

Ordinary hydrogen is written 1H1, deuterium is 2H1, and tritium is 3H1

Light elements tend to have about as many neutrons as protons; heavy elements apparently need more neutrons than protons in order to stick together. Atoms with a few too many neutrons, or not quite enough, can sometimes exist for a while, but they're unstable. Unstable atoms are radioactive: their nuclei change or decay by spitting out radiation, in the form of particles or electromagnetic waves.

(a)The properties of alpha, Beta and gamma radiation and a brief treatment of the evidence for their existence. 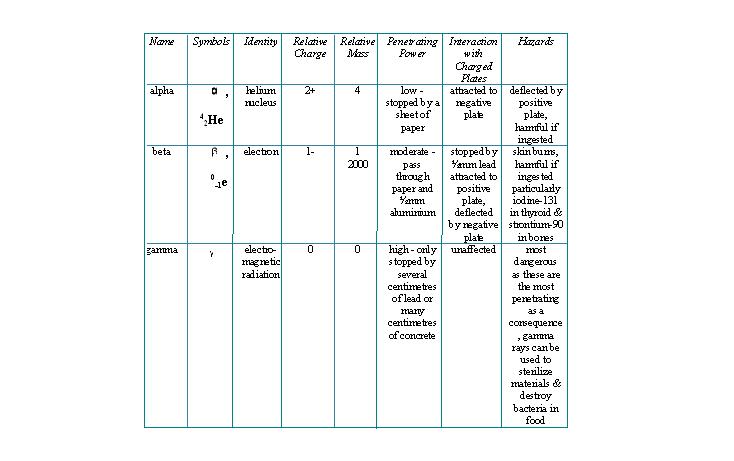 (b)Stability of radioactive nuclei as measured by their half-life.

At the beginning of the twentieth century detailed investigations were made of the disintegration of naturally occurring radioactive isotopes. Scientists were interested in:

1)the types of radioactive change (alpha-decay or beta-decay)

2)the products of decay (alpha-particles, beta-particles or gamma rays)

3)the rate of decay, and 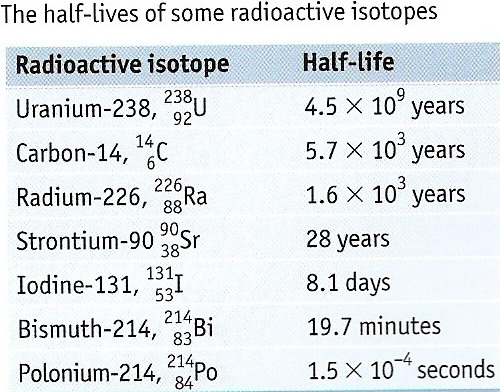 (c) The changes in nuclei resulting from the loss of alpha, Beta and gamma rays: radioactive decay series.

(d)Uses of radioisotopes of importance in chemistry

1) Penetrating gamma-radiation from cobalt-60 is used in cancer treatment as tumour cells tend to be more susceptible to radiation than other cells.

6) Carbon-14 is used as a biological tracer, for example, in studies of photosynthesis

2.3 The Electronic Structure of the Atom:

The atomic spectrum of hydrogen and other line spectra and successive ionization energies of elements as evidence for the existence of electronic energy levels.

Each line in an emission spectrum corresponds to light of a particular frequency.

The colours and frequencies of the more prominent lines in the visible region of the atomic hydrogen spectrum.

The relation between the line spectra of elements and electronic energy levels should by clearly brought out.

The points on the graph between one noble gas and the next correspond to the filling of one shell of electron. This means that the sub-sections of points correspond to sub-shells of electrons.

Atomic number as the basic classification of the elements in the Periodic table.

The Origin of the Periodic Table

Early Chemists studied the group of known elements, and tried to come up with logical classification systems based on what they knew.An early attempt was made by a German Chemist named Johann Dobereiner, in 1817. Dobereiner noticed that there were several groups of three elements which shared certain properties. For example; chlorine, bromine and iodine all share antiseptic properties. Dobereiner called each group of three elements with similar properties a "triad". He also noticed that when he arranged the elements of a triad by atomic mass, the middle element had an atomic mass that fell close to the middle of the other two atomic masses. Almost fifty years later, an English Chemist named John Newlands proposed an updated classification system. In the 1860's a German Chemist named Lothar Meyer was developing a periodic table based on the idea that when the elements were arranged by atomic mass, certain properties were repeated periodically. There are two main classifications in the periodic table, "groups" and "periods." Groups are the vertical columns that include elements with similar chemical and physical properties. Periods are the horizontal rows.

Below is the periodic table:-

Electronic structure as the basis for the periodicity in chemical and physical properties.

TEST YOURSELF WITH THE QUIZZES:

4.PROPERTIES OF METALS, NON-METALS AND METALLOIDS