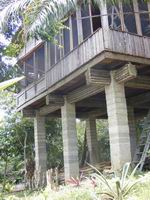 With an ever-increasing population and an actively growing economy, Ghana is a maze of buildings of all types and for many purposes in various stages of construction. Inflation continues to push the cost of construction in an upward spiral. Environmental concerns also are impacting on choices of building materials. These influences have encouraged an examination of materials and methods to see if practical alternatives are available. 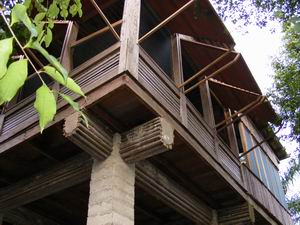 Akwasi McLaren graduated from the School of Architecture at the University of Waterloo. He is very much committed to designing buildings which are in harmony with their surroundings and which make use of indigenous construction materials. The "Treehouse" which he is constructing on a hillside overlooking the coastal fishing and resort village of Busua in Ghana is an excellent example of his commitment to put his designs into practice.

Design with a Difference

Busua is located on the coast of Ghana, featuring regular onshore breezes in the daytime and offshore breezes during the night. The warm temperatures are tempered by this cooling effect and Akwasi has chosen to use that to his advantage by providing the maximum area of the exterior walls of his "Treehouse" open. Seasonal storms during the rainy season require that there be some way of protecting the interior of the house from rain. The use of vertical shutters provides that protection while at the same time allowing air flow when they are closed.

The "Treehouse" design has incorporated local materials for both function and aesthetics. Split bamboo roofing is often used in southern rural communities of the country where bamboo can be found in low lying, wet areas. Akwasi has used it for this building because it is inexpensive and very renewable. Bamboo is one of the world's fastest growing plants growing at the rate of one foot per day.

Raffia palm is another plant growing in low lying areas in the south. The palm fronds are often woven and used for roofing, while the stem is used for a variety of purposes. The stem has been used extensively in the "Treehouse". Raffia stems were used for the forms when casting the beams, and then were left in place to give the beams an organic feel. Raffia was also used as fill for walls, both interior and exterior. Raffia was used as a solid fill on the exterior walls below the windows. On interior walls, spaces were introduced in keeping with the concept of openness which was desired.

Other environmental concerns have been considered when the "Treehouse" was being designed. There is no municipal water source in the community. The villagers use shallow wells for drinking and domestic purposes and during the dry season these wells are often dry. Efforts at digging wells near the "Treehouse" have been unsuccessful and this forced the builder to consider an alternative. Eaves troughs will capture rainfall from the roof and it will be stored in a storage tank located under the house.

From there it will be pumped to a smaller tank located on a stand above the roof of the bathroom. Gravity will feed water to the bathroom, to a shower and basin, and to the kitchen to a second basin. The "Treehouse" features a composting toilet which will not only enable water conservation but will also provide valuable compost for the gardens which have been started on the plot. 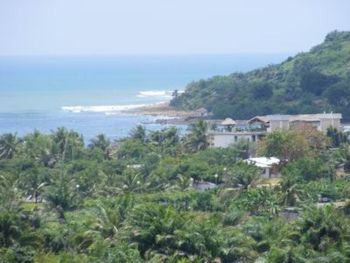 The "Treehouse" is not the first building designed by the architect. While at university, Akwasi designed a hotel for his parents. In 2002, they built and opened the African Rainbow Resort Website in the village of Busua, a ten minute walk down the hill from Akwasi's "Treehouse".

Busua is well known for its safe beach and great surf. And so when architect/builder Akwasi is not dreaming of his next project Website, he is out being Akwasi, the surfer.