From WikiEducator
(Redirected from Allen Brook)
Jump to: navigation, search 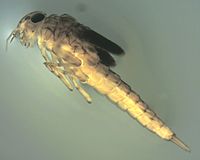 Mayflies in this genus have a distal lobe on their antennal scapes, and the second segment of labial palps has an expanded medial process. Villopores are absent on legs.

Click to see the antennal scapes. The dorsal and ventral views can be seen here.