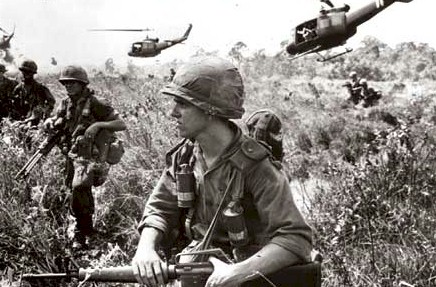 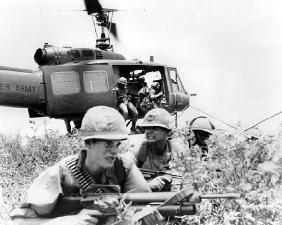 The Vietnam War was a military conflict that started on the 1st of November 1955 and ended on the 30th of April 1975, and on the Anti Communist side was South Vietnam, the United States of America, South Korea, Australia, Philippines, New Zealand, Thailand, the Khmer Republic, the Kingdom of Laos and they were supported by Spain and Taiwan. On the Communist side was North Vietnam, the Viet Cong, the Khmer Rouge, the Pathet Lao and they were supported by the Soviet Union, China, North Korea, Czechoslovakia, Cuba and Bulgaria. The United states government saw involvement in the war as a way to stop a communist takeover  of South Vietnam which was democratic and not communist, the government of North Vietnam and the Viet Cong saw it as a colonial war against the French who were backed by the United States and later against South Vietnam which they thought was a puppet state of the U.S. ,  the United States sent military advisors to what was French Indochina in 1950 and then American troop levels tripled in 1961 and again in 196, then in 1965  U.S. combat units were deployed. Operations during the war were not limited to just North and South Vietnam some spanned international borders with Laos and Cambodia, both countries were heavily bombed. After a peak of American involvement in the Vietnam War in 1968 at the time of the famous Tet Offensive, the American ground forces were gradually withdrawn as part of a United States government policy known as Vietnamization. Fighting continued despite the fact that all parties had signed the Paris Peace Accords in January 1973. As a result of the Case–Church Amendment that was passed by the U.S. Congress U.S. military involvement ended on the 15th of August 1973.The war ended with the Fall of Saigon which is now called Ho Chi Minh City, the following year North and South Vietnam were reunified, it has been estimated by people that fewer than one million to more than three million Vietnamese soldiers and civilians died during the war, it has also been estimated that 200,000 to 300,000 cambodians died, 20,000 to 200,000 Laotians died and about 58,220 U.S. military personel died along with 303,644 more wounded  during the war 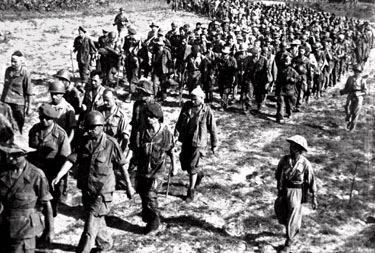 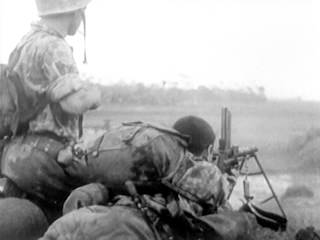 During January 1950 the communist countries who were led by the People's Republic of China (PRC) recognised the Viet Minh's Democratic Republic of Vietnam (North Vietnam)  based in the city of Hanoi as the rightful government of Vietnam and the non-communist countries recognised the French backed State of Vietnam led by the former Emperor of Vietnam Bảo Đại based in the city of Saigon now called Ho Chi Minh City as the rightful goverment of Vietnam the following month, because of the outbreak of the Korean War in June 1950 Washington policy makers were convinced that the war that was currently going on in Indochina was an example of communist expansionism directed by the Kremlin in the Soviet Union led by Joseph Stalin (1878-1953). Military advisors from the People's Republic of China started assisting the Viet Minh in July 1950, because of the PRC weapons, expertise and laborers the Viet Minh were transformed from a guerrilla force into a regular army. And in September that year the United States created a Military Assistance and Advisory Group (MAAG) to screen French requests for aid, advise on strategy and to train Vietnamese soldiers, by 1954 the United States had supplied the French with 300,000 small arms and had spent $1 billion U.S.  in support of the French military effort in Indochina, this was 80% of the cost of the war. There had also been talks between the French and the Americans about the possible use of three tactical nuclear weapons, one version of this plan was called Operation Vulture which envisioned sending 60 Boeing B-29 Superfortress Bombers from the U.S. bases that were in that region, these bombers were to be supported by 150 fighters launched from U.S. Seventh Fleet carriers, the B-29's were to bomb Viet Minh commander Võ Nguyên Giáp's positions, Admiral Arthur William Radford who was the chairman of the U.S. Joint Chiefs of Staff gave this nuclear option his backing. During the negotiations U.S. aircraft carriers sailed to the Gulf of Tonkin and reconnaissance flights were conducted over Dien Bien Phu. U.S. President Dwight D. Eisenhower made American support contingent on British support, but London was against such a venture. Eventually Eisenhower got convinced that the political risks outweighed the possible benefits of intervening so he decided against it.


The Soviet Union as well as the PRC gave crucial support to the Viet Minh. Support from the PRC in the Border Campaign of 1950 allowed suplies from them to come from them into Vietnam, through out the conflict U.S. intelligence estimates remained doubtful of French chances of success. The Battle of Dien Bien Phu marked the end of France's involvement in Indochina (Vietnam), Vo Nguyen Giap's Viet Minh gave the French a stunning military defeat and on the 7th of May 1954 the French Union garrison surrendered to them. Out of the 12,000 prisoners taken by the Viet Minh only 3,000 survived. The French negotiated a ceasfire agreement with the Viet Minh at the Geneva Conference (1954), and as a result independance from the French Union was granted to Cambodia, Laos and Vietnam. 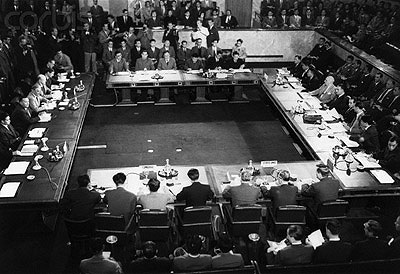 After the Geneva Conference of 1954 Vietnam was temporarily partitioned at the 17th parallel and under the Geneva Accords all civilians were to be given the oportunity to move freely between North and South Vietnam for a 300 day period. Elections throughout Vietnam were to be held in 1956 to establish a unified government for the country. There was around 1 million northeners, maily minority Catholics that fled south because of the fear of persecution by the communists in North Vietnam, following an American propoganda campaign  that was using slogans like "The Virgin Mary is heading south" and aided by a United States funded $93 million relocation program that included ferrying refugees from the north with the Seventh Fleet. It has been estimated that as many as 2 million more would have left North Vietnam if they had not been stoped by the Viet Minh. The northern mostly Catholic refugees were supposed to give the later Ngô Đình Diệm regime a strong anti communist body of voters. Diệm later went on to fill his administrations key posts with mostly northern and central Catholics, Diệm was also a Catholic himself.


As well as the Catholics flowing south up to 130,000 "Revolutionary Regroupees" went to North Vietnam for "regroupment", they expected to return to South Vietnam within two years. The Viet Minh left about 5,000 to 10,000 cadres in the South as a "politico-military substructure within the object of its irredentism". The last French soldiers were to leave Vietnam in April 1956 and the PRC compleated its withdrawl of soldiers from North Vietnam at around the same time. Around 52,000 vietamese civilians moved from the South to the North.


In the North of Vietnam the Viet Minh ruled as the Democratic Republic of Vietmam, they engaged in a drastic land reform program in wich 100,000 percieved "class enemies" were executed. Some estimates from people range from 200,000 to 900,000 deaths from things like executions, camps, and famine. leaders in Hanoi admitted to "excesses" in implementing this program so they restored a large amount of land to the original owners in 1956.


The South of Vietnam meanwhile constituted the State of Vietnam with Bảo Đại who was the last emperor of the Nguyễn dynasty as Emperor and Ngô Đình Diệm as his Prime Minister. In June 1955, Diem announced that the scheduled 1956 elections would not be held, he claimed that South Vietnam had rejected the Geneva Accords from the start and was therefore not bound by them. He asked  "How can we expect 'free elections' to be held in the Communist North?". United States president Eisenhower agreed with senior U.S. experts when he wrote than in 1954 "80 per cent of the population would have voted for the Communist Ho Chi Minh over Emperor Bảo Đại".


In 1955 from April to June Diem (against U.S. advice) eliminated any political oposition to him in the south by launching military operations against the religious sect Cao Dai, the Hoa Hao sect of Ba Cut and the Binh Xuyen organised crime group. As broard-based oposition to what people considerd his harsh tactics grew grater, Diem increasingly sought to blame the communists.


On the 23rd of October 1955 there was a referendum on the future of the state of Vietnam, Diem rigged the poll that was supervised by his brother Ngo Dinh Nhu, he was credited with 98.2% of the vote, this included 133% in Saigon. Three days later on 26th of October 1955 Diem declared South Vietnam to be an independent state known as the Republic of Vietnam (ROV) with himself as president. 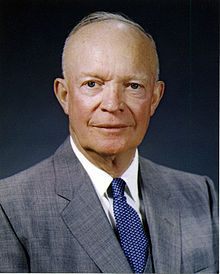 
Ngo Dinh Diem the leader of South Vietnam was a devout Roman Catholic and he was also fervently anti-communist, nationalist as well as socially conservative. Luu Doan Huynh a historian noted that "Diem represented narrow and extremist nationalism coupled with autocracy and nepotism", because of Diem being a wealthy Catholic many ordinary Vietnamese viewed him as being part of the elite that had helped the French rule Vietnam from 1887-1954, he had been the interior minister in the colonial government. Since the majority of Vietnamese people were Buddhist they became alarmed by actions such as when he dedicated the country to the Virgin Mary.


Starting in the summer of 1955 Diem launched the "Denounce the Communists" campaign, in which communists and other anti-government elements were ether arrested, imprisoned, tortured or executed. Diem brought in the death penalty against any activity that the government thought was communist in August 1956. The Diem Government called their oponents the Viet Cong, they did this to degrade there nationalist credentials. Because of the political opression about 12,000 suspected oponents of Diem were killed between 1955 and 1957, by the end of 1958 about 40,000 political prisoners had been jailed as well.


During May 1957 Diem took a ten day visit to the United States of America, during his visit President Eisenhower pledged his continued support, there was also a parade in New York City that was held in Diem's honour. Despite Diem being publicly praised in private U.S. Secretary of State John Foster Dulles conceded that Diem was only chosen because there were no better alternatives.


The future U.S. Secretary of State Robert McNamara wrote that American Patrons of the ROV (Republic of Vietnam) were almost completely ignorant of the culture of Vietnam. They didn't know much about the language or the long history of the country.


President Eisenhower noted that if the Geneva Accord elections had been held "possibly 80 percent of the population would have voted for Communist Ho Chi Minh"  and the government would have quickly became more repressive and unpopular. The government under Diem failed in implementing a land reform program for all the poor people of South Vietnam who happend to be 90% of the population  this was along with "Peace, security, freedom, and their standard of living" was the poor peoples prime concern according to the specialist Philippe Devillers.


The government of South Vietnam used widespread repression between 1954 and 1960 it captured about 50,000 prisoners and put them into what was called  "political re-education camps" as part of the  Denunciation of Communists Campaign. The British specialist P. J. Honey was invited to examine the camps in 1959, he concluded after talking to rural Vietnamese that "the consensus of the opinion expressed by these peoples is that...the majority of the detainees are neither communists nor pro-communists".