The treaty of versailles

The Treaty of Versailles  was one of the peace treaties at the end of World War I. It ended the first world war between Germany and the Allied Powers. It was signed on 28 June 1919, exactly five years after the assassination of Archduke Franz Ferdinand. 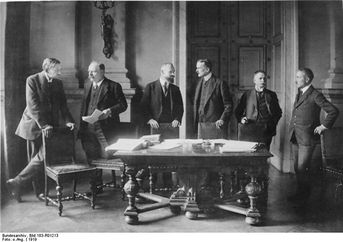 Pictures to do with the Treaty of Versailles 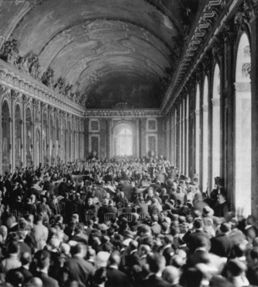 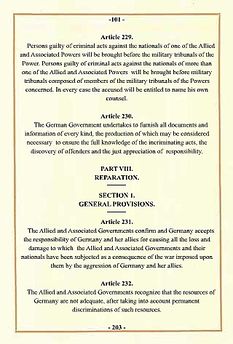 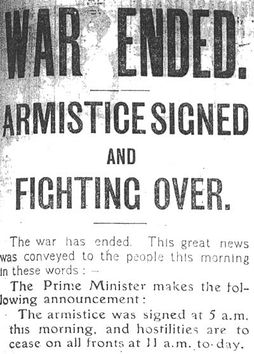 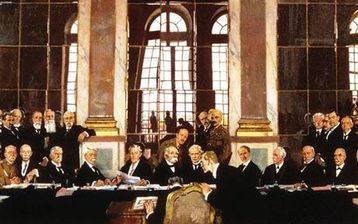 Background to the Treaty of Versailles.

World war one had left the continent of Europe devastated, huge areas of north-eastern Europe had been reduced to ruble, also those countries that had fought in the war had suffered losses that they had not experienced before.

The attitudes of the Big Three towards Germany.

The Big Three were David Lloyd George of Britain, Georges Clemenceau of France and Woodrow Wilson of America 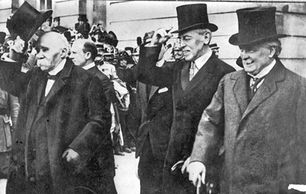 David Lloyd George had two different views about what should be done with Germany. one of his views reflected what the British public wanted which was revenge against Germany. This was his public view, he had this because if he was seen to be soft on Germany the British public would have quickly voted him out of office. personally Lloyd George was worried about the rise of communism in Russia. And he feared that it might spread to Western Europe after the war had ended. He felt that Germany should be treated in a way that left the country as a barrier to resist the expected spread of communism.

Georges Clemenceau had the view that Germany should be brought to its knees so that they could never start a war again this was also the view of the French public so unlike Lloyd George of Britain he did not have to changes his policies to suit the public.

Woodrow Wilson wanted The Treaty of Versailles to be based on his 14 points, some of the points were, there should be no more secret treaties between two countries, countries must seek to have less weapons and make their armed forces smaller and that all countries should be part of the League of Nations.

The treaty can be divided into territorial, military, financial and general sections.

Territorial: the following land was taken away from Germany and was given to these countries France, Belgium, Denmark, and Poland. Alsace-Lorraine was given to France, Eupen and Malmedy were given to Belgium, Northern Schleswig was given to Denmark, Hultschin was given to Czechoslovakia and West Prussia, Posen and Upper Silesia were given to Poland. The League of Nations also took control of Germany's overseas colonies. 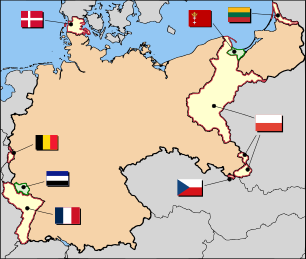 Military: Germany was forced to reduce its army to only 100,000 men and they were also not aloud any Tanks,Also Germany was not allowed an Air force, could only have about 6 capital naval ships and also couldn't have any submarines. Germany ended up having a demilitarized zone (DMZ) which was the west of the Rhineland and 50kms east of the River Rhine.This meant that no German soldier or weapon could go in this zone. Also the Allies were going to keep an army of occupation on the west bank of the Rhine for the next 15 years after the treaty.

Financial: The vital industrial territory that was lost would be a serious blow to any attempts made by Germany to rebuild its economy also with the financial penalties linked to reparations they had to pay it made Germany think that the Allies wanted nothing else but to bankrupt them. Germany was also banned from uniting with Austria to form a super state, in an attempt by the Allies to keep Germany's economic potential to a bare minimum.

General: There were three important clauses. 1 Germany was made to admit full responsibility for starting the war in the first place, this was the infamous War Guilt Clause. 2 because Germany was made to admit to starting the war as stated in the War Guilt Clause, they were made to pay reparations most of which would go to France and Belgium to pay for the damage to their infrastructures during the war. They were eventually made to pay 6,600 million pounds in reparations. 3 a League of Nations would be set up to keep world peace. Fact: the first 26 clauses of the treaty dealt with the League's organization.

The German reaction to the Treaty of Versailles

When the terms of the treaty of were made public in Germany there was anger through out the country, to the Germans the treaty became known as a Diktat- because it was being forced on them and they had no choice but to sign it. lots of people didn't want the treaty to be signed, but the representatives at the signing knew that they had no choice as Germany was incapable of restarting the war again.

The consequences of the Treaty of Versailles

In the eyes of the Big Three it was a fair peace as it kept Germany weak yet strong enough to stop the spread of communism. It also kept the French border with Germany safe from another German attack, created the organization known as the League of Nations that was supposed to end warfare throughout the world. however it made Germany feel they been unfairly treated, also those in the German government who had signed the treaty became known as the November Criminals in Germany. many citizens felt that they were being punished for the mistakes made by the government in August 1914 as it was the government that had declared war not the people.