Background to the Arab-Israeli Conflict

Because of the development of the Zionist movement the immigration of European Jews increased. This lead to tensions emerging after the 1880's between the Jews and Arabs, it also increased the size of Jewish communities in Palestine by the attainment of land from Ottoman and individual landholders who were known as effendis, also agricultural settlements were established in the historic lands of Judea and Israel which had been part of the Ottoman Empire since 1516. In 1880 it was estimated that the population of Palestine west of the Jordan River was under 590,000 people of witch 96 percent were Arabs (Muslim or Christian) and roughly 4 percent of the population were Jewish. Michael Oren the current Israeli ambassador to the United States of America has written that about 300,000 Arabs did eventually move into Palestine from other surrounding Arab countries to benefit from the economic opportunities that were created by the Zionists, who were more skilled with modern technology and at building urban institutions.

During the time of the British mandate, the Balfour Declaration which had been signed previously in 1917 before the British mandate said that the government of Great Britain supported the establishment of a "Jewish national home" in Palestine. As a result this exasperated the tensions between the Arabs  who already lived in the Mandate of Palestine and the Jewish people who had moved there during the Ottoman era. The Faisal-Weizmann Agreement which was signed on the 3rd of January 1919 was done to promote Arab-Jewish cooperation on the advancement of a Jewish national homeland and an Arab nation in a large part of the Middle East. However this agreement between Emir Faisal and Chaim Weizmann had little to no effect on the conflict at all. Eventually tensions rose between the Palestinians and the Jews which led to the 1920 Nebi Musa riots in which five Jews and four Arabs were killed, 216 Jews and 23 Arabs were wounded. And the 1921 Jaffa riots in which 47 Jews and 48 Arabs were killed, with a further 146 Jews and 73 Arabs being wounded.


further conflicts between the Jews and Arabs happend in 1929 with the Hebron massacre where 67 Jews were killed and Jewish homes and synagogues were ransacked  and in the 1936-1939 Arab revolt in palestine where the British and Jewish losses were 300 Jewish people killed and 4 Jewish people executed and 262 British soldiers killed with 550 soldiers being wounded. The Arab losses were 5000 killed,15,000 wounded, 108 executed, 12,662 detained and 5 exiled.


A British Royal Commission of Inquiry was set up in 1936, this became known as the peel commission because it was led by  William Robert Wellesley Peel. In 1937 the commission proposed a partition plan for Palestine. This plan gave the Arabs control over all of the Negev, most of what is the present day West Bank and Gaza and the Jews got control over the city's of Tel Aviv and Haifa, present-day Northern Israel and the surrounding area's. The British were to maintain control over the city's of Jaffa, Jerusalem, Bethlehem and there surrounding areas. The Jews accepted the partition plan however the Arabs rejected it and demanded an end to Jewish immigration  and the sale of land to the jews. They were also calling for Palestine to become an independant Arab state. 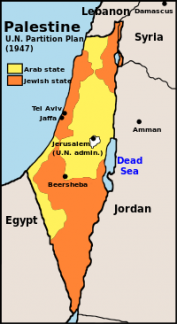 The Arab-Israeli conflict basically came about becuase both the Israeli's and the Palestinian's layed claim to the land now known as Israel (formerly called Palestine before 1948).Tensions between Israel and the surrounding Arab nations became so high that the 1948 Arab-Israeli war broke out on the 15th of May 1948 and ended on the 10th of march 1949 with an Israeli victory. Since then most of the surrounding Arab nations have been involved in a series of wars against Israel the first being in 1956 called the Suez Crisis and then the Six Day War in 1967, the Yom Kippur War in 1973, the South Lebanon Conflict in 1978, the Lebanon War in 1982, the First Intifada in 1987, the Second Intifada in 2000, the Second Lebanon war in 2006 and the Gaza War in 2008. The Arab-Israeli Conflict wich stated in 1948 is still ongoing