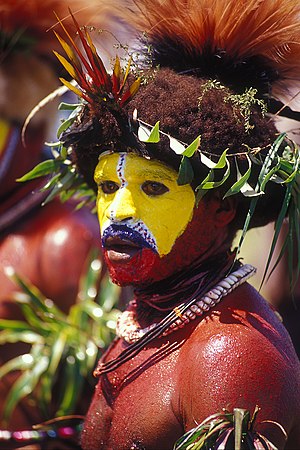 This is a Huli Wigman from the Southern Highlands of Papua New Guinea. However, culture encompasses more than just outward physical appearances and style of dress.

Culture is an important human/social construct. It attracts a great deal of attention in the Social Sciences and in International Relations.

Culture is also something that has received a great deal of attention over the past two decades, particularly the intersection of culture and global politics. Culture defines the identity of the individuals living in a society and it comprises of customs, norms and the genres that inform social life. Another element that plays a key role in influencing culture is religion, and it is this dynamic that has drawn great interest in recent years, most notably in the post-9/11 period. Cultural groups often define themselves by viewing and representing cultures different to their own as alien or as the ‘Other’. In the post-Cold War era there have been a number of discourses emerge on the importance of cultural and civilisational difference and some scholars have speculated that these factors would be the drivers of future conflicts, not ideology or expansionist tendencies of aggressor states. However, other scholars criticise these assertions as being far too simplistic. Instead, they urge us to consider issues of human insecurity as the driving force between conflict in the contemporary era - particularly the increasing wealth disparity that is occurring not only between states, but also between different groups within states.

Reflection for your study of this section

By the completion of the e-learning activities for this Module, you should have a deeper understanding of what culture is, as well as what constitutes successful cross-cultural communication.

What comprises a culture and what factors influence culture? For example do you think factors such as geography, ritual, religion or language shape culture or are culture?

(Visit the course feed to read comments from participants)