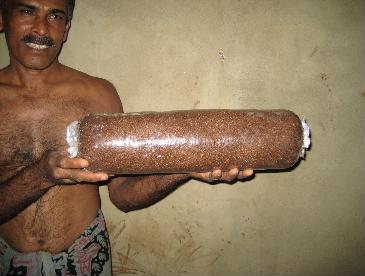 Mr. Dharamadasa is a very innovative farmer. He wanted to find solutions for one of the major problems they face in mushroom cultivation. One problem is that the mushroom bags which they presently use take more space. And it takes considerable no. of hours to fill the culture medium. It is some what a hectic job when comparing with the yield they harvest from a bag. So, what he did was he made a bag which has a double length (24 inches long, earlier it was 13 inches) with a same width of 7 inches. He found that this bag can utilize the space effectively and also he would be able to harvest higher yield – approximately his harvest is doubled now).

This farmer started mushroom cultivation in 2005 after the training conducted by the Vidatha centre of the Divisional Secretariat of Kamburupitiya. According to him, at that time he had a very little idea about the enterprise. Further he mentioned that at that time this enterprise was not profitable. With the introduction of the L3 programme, he had the opportunity to learn each and every aspect of the cultivation as well as the enterprise and moreover, he was motivated to improve his enterprise a profitable and sustainable one. At present, he maintains his cultivation in medium scale producing 400kg of mushrooms and earn considerable amount of income and further, he expressed his views by saying that now he is earning than a government servant. He very much appreciated all the trainings conducted by the project team and stated that all such events helped them to uplift their business a success. He proudly mentioned that now they have a higher living standard and they always disseminate the new knowledge they gained to the neighbors who are willing to enter the business.

Strength of the mushroom farmers’ society

They initiated this society four years back with the help of the Vidatha Centre. At that time very few members were there. However, with the introduction of the L3, they have been able to become a very strong society having more than 60 members. Currently, they are maintaining a fund which disburses small loans for the members. Further, they disseminate knowledge through demonstrations and trainings to new comers. At present they train at least four new members in a month. Moreover, they have a very good reputation among the village society.

Photos of the Session