The truth about Food 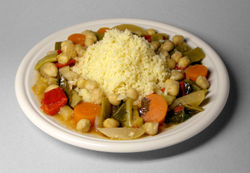 Food is any comestible substance that can be eaten with few or no significant negative health effects. Such a broad definition allows for food to be rich in nutrient or not rich at all. Almost all foods are harmful if too much is consumed; but taken in moderation, the benefits must greatly outweigh the hazards. Foods such as vegetables, breads, dairy, and meats are examples of foods that are good for us; on the other extreme, we have junk foods which supply us with few nutrients, and have been referred to as 'empty calories'.

The study of food is called food science. In English, the term food is often used metaphorically or figuratively, as in food for thought. In a broader sense, "food" can refer to anything ingested that provides energy or spare parts. For more information/exercises click here