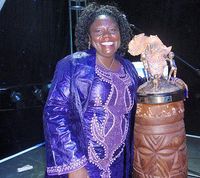 Madame Memunatu Baby Pratt is the Head of Peace and Conflict Studies, Fourah Bay College. She has been a lecturer for over twenty years at the University of Sierra Leone. She is engaged in teaching, research, national and international public services. She was recently on a two year sabbatical leave as Legacy Officer of the United Nations-backed Special Court for Sierra Leone (SCSL) as an international staff where her key role was to ensure that programmes and activities developed by the Special Court continue as a lasting legacy for the people of Sierra Leone. She was also a lead trainer for the human resource capacity-building programmes of the Court. She has worked in the field of peacebuilding and gender for the past 15 years, as a trainer, consultant and activist at local and international levels.

She is one of the authors of the just concluded publication on gender and security sector reform in West Africa and has just commenced a course on women peace and security and gender and peacebuilding in Peace and Conflict Studies at Fourah Bay College. Presented papers at international meetings and conferences and done some publications especially with the Commonwealth Foundation. She is a supervisor for several post-graduate programmes at the University of Sierra Leone. She is a receipt of national insignia Independence day award and conferred the title of Grand Officer of the Order of the Rokel (GOOR) by His Excellency the President of the Republic of Sierra Leone in 2007 for her work in peacebuilding and education in Sierra Leone

Claudine Hingsting – ‘The Media as Vehicle for the Promotion of women’s empowerment in Sierra Leone’, M.A Gender Studies 2004

1. ‘Conflict and the Millennium Development Goals’ in Breaking with Business as Usual- Civil Society Perspectives on the MDGs Commonwealth Foundation, London September 2005

2. ‘Helping academics in the preparation of research proposal’ Research Global Leaning from each other, Association of Commonwealth Universities, March 2007 Issue 15

7. ‘Achieving MDGs in the midst of poverty and violent conflicts’ in ‘The Commonwealth Heads of Government Book’ London, Henley Media Group, 2005.

8. “Maintaining State function and Public and Community Services in Conflict situations: Regional lessons from the case of Cassamance, Senegal – The dynamics of emerging from conflict situations in West Africa” OECD Zinguichor (Senegal) 25 – 27

UNPUBLISHED (These are just a selection of some)

1994-2010 – INTERNATIONAL/LOCAL CONFERENCES AND WORKSHOPS AND SUBMISSIONS

1. ‘Approaches to Conflict’., A Lecture delivered on the Visit of the Nigeria Command and Staff College to Fourah Bay College, University of Sierra Leone

6. ‘Women and Security’ Submission to the Office of National Security Sector Review Process, 2004/5

7. Education in Difficult Circumstances’ – A Paper presented at the Commonwealth Education Ministers Conference in Edinburgh Scotland on ‘A Case Study of the Centre for Peace and Conflict Studies, University of Sierra Leone’. October 2003

10. ‘Transition from War to Peace’ – The Sierra Leone Experience’ – Parallel Symposium at the Commonwealth Heads of Government Meeting in Nigeria (CHOGM) – December 2003

12. ‘The Role of the Military in the New Dispensation in Sierra Leone’ - A Paper, presented at an annual conference held by Amnesty International and other NGOs on the theme The Transfer of small arms and Light weapons in Africa British Council, October 1999. (Published)

20. ‘The Current Status of the Peace Process in Sierra Leone’, A Seminar Paper, Department of Peace Studies, University of Bradford, UK 2001 http: wwwbradford.ac.uk

23. ‘The Role of SALSTINET’ A paper presented at the Launching of Internet Services in Sierra Leone Organized by SIERRATEL 26th July 1995

24. ‘Information Resource Sharing and Networking ‘ A Paper presented at a workshop organized by SALSTINET 5th December 1995

5. National Independence Day Award 2007 – Grand Officer of the Order of the Rokel - GOOR