Two of the most troublesome concepts in The Merchant of Venice are the concepts of wealth and value. Several of the characters possess great material wealth, while others (Bassanio included) confess to possessing things of greater intangible wealth. Value is linked to wealth, and characters make decisions based these things. Generally if our opinions of value and wealth connect with the characters, we will see their actions in a positive light. If they don’t connect, we see their actions in a negative light. For example, if we value Christianity above Judaism and money above family, we view Jessica’s treatment of her father as a good thing (perhaps a little cheeky). If we don’t value money above family, we see her in a negative light. In exploring these ideas, Shakespeare begins to question not only what the audience considers of value, but also the audience’s values.

Find quotations that show the following: 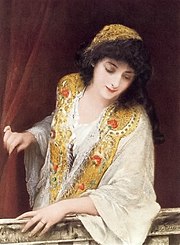 Commerce, riches and treasure adorn many of the speeches used to develop the bond plot and the caskets sub-plot. Write down some examples of each:

One of the possible reasons for Christians disliking Jews in the play is that people like Shylock stopped the free flow of money, and therefore people’s ability to enjoy themselves. Find evidence of the difficult relationship between the Jewish and Christian concepts of moneylending.

All of the characters are dependent on money. It is one of the great levelling factors in the play. It symbolises the interdependence of humans in society- even Christians and Jews. Find evidence of the following characters’ dependence on each other:

The watery images reflect the canals of Venice, and echo the idea of ships abroad. The stormy seas, wind and tempests, and especially how ships fare in them are at much talked about in Venice, as they probably would have been in Elizabethan London. Look at the first scene, up to line 45. How many watery images can you pick out?

When Bassanio first tells Antonio about Portia, he uses references to the sea. Belmont itself was a sea journey away from Venice, and the Prince of Morocco also refers to the sea when he tries to win Portia.

The storms of Venice contrast with music at Belmont. Music is a symbol of love and harmony, and it is no accident that a song is sung as Bassanio chooses the winning casket When Lorenzo and Jessica talk of music in the garden at Belmont all has turned out well. Not surprisingly, Shylock hates music. He wants Jessica to lock up the house when she ‘hears the drum/ And the vile squealing of the wry-necked fife.’

Look at Lorenzo’s speech in Act 5, scene 1, lines 70—88. It is a veiled reference to Shylock in the way it contains images which refer to the power music has to tame beasts: The man that hath no music in himself,/ Let no such man be trusted. What is he saying about Shylock, Jews and Jessica’s heritage?

Extension: what is ‘the music of the spheres’? How does it relate to what we have discussed above?

Animal imagery is often used both by Shylock, and others to describe him. We learn that Antonio has often referred to him disparagingly as dog, and he is also compared to the devil to reinforce his wickedness. Shylock first brings up the idea of sheep when he tells a Bible story to illustrate his views on usury (Act I scene iii). As if they had been present during this conversation, Shakespeare makes several of the other characters pick up the sheep image again, particularly to call Shylock a wolf preying on Antonio, who is compared — by himself and others — to a sheep. Look at Antonio’s speech at Act 4, scene 1, lines 70—83, and Gratiano’s at lines 128—38. Can you pick out the images of sheep and wolves?

"You may as well use the question with the wolf/ Why he hath made the ewe bleat for the lamb;" -Antonio, act 4 scene 1 lines 73-74

" O be thou damned, inexecrable dog,/ And for thy life let justice be accused!/ Thou almost mak'st me waver in my faith,/ To hold my opinion with Pythagoras/ That souls of animals infuse themselves/ Into the trunks of men. Thy currish spirit/ Governed a wolf, who - hanged for human slaughter -/ Even from the gallows did his fell soul fleet,/ And whilst thou layest