All rocks belong to one of the three main groups making up the earth's crust: igneous, sedimentary, and metamorphic.Igneous Rock

Is any rock made by the cooling of magma or lava. Magma is molten material that flows under the earth's crust. Sometimes it finds a weak spot and breaks through to form great areas of rock called flood basalts, or it may erupt as a volcano. Besides basalt, examples of igneous rock are granite and obsidian. Igneous rocks come with or without observable crystals that are not in layers or with or withour air holes or glasslike.Igneous Rock Examples 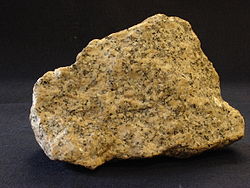 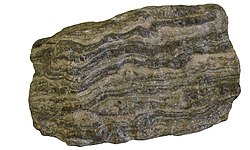 Sedimentary is gravel, sand, clay, or soil that settles out of water in riverbeds, ponds, lakes, and oceans. Sedimentary rocks are rounded-appearing mineral and rock particles that are cemented together.

Sedimentary rocks are formed from particles of sand, shells, pebbles, and other fragments of material. When all these different particles are put together then they form what is called sediment. The sediment accumulates in layers and after a long period(can be million of years) of time hardens into rock. It is usually the only type that contains fossilspebbles, or stones in the rock. sedimentary rocks are soft and break easily.

Examples of this rock type include conglomerate and limestone.

Metamorphic rock has been through a process much like baking. (Meta means changed, and mophic means form.) The change is caused by intense heat and great pressure deep in the earth. Under these conditins, sedimetary limestone becomes marbel. Sedimentery sandstone turns into quartzite. Igneous granite changes into gneiss (pronounced "nice". Metamorphic rocks are crystals/minerals, often in layers.Metamorphic Rock Examples gneiss schist 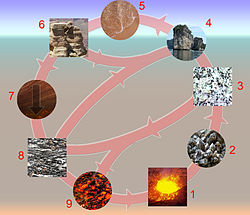