The cost-effectiveness of open and distance learning relative to conventional systems of delivering education relies heavily upon its potential to achieve economies of scale. Conventional, classroom-based education is characterised by relatively low fixed costs. Even though considerable amounts are spent on providing school buildings, the relative importance of these costs is reduced if they are depreciated over the useful life of the structure. However, large numbers of teachers are needed to provide conventional education, and their salaries represent a high variable cost.


By way of contrast, ODL institutions incur high fixed costs in developing self-instructional materials. However, the variable costs of reproducing and distributing these materials, as well as providing face-to-face tutorials and academic support, can be considerably lower than for conventional education. If the ODL institution manages to increase the number of students registered for a particular course, the average costs per student declines more rapidly than those for conventional education. This situation is illustrated in Figure 2e below. 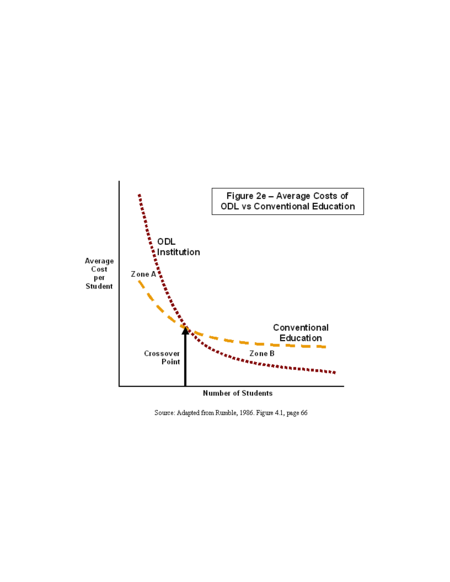 The point at which the graph lines showing the average costs for the two modes of delivery cross over corresponds with a specific number of students. If the ODL institution can enrol more than this number for its course, then both average and total costs of delivering the service will be lower than for classroom-based education.

From an economist’s point of view, ODL institutions must do the following in order to ensure that they remain cost-competitive in relation to conventional methods of delivering education: