When IP addresses were introduced, only a portion of the theoretical four billion or so IP addresses were available for assignment. Early on, this was not a problem because the Internet was only used among groups of academic researchers, a few high tech companies, and the U.S. Government. But after the Internet exploded in popularity during the mid-1990s, it soon became clear that there won't be enough IP addresses to keep up with demand. In response, IPv6 was proposed as a long term solution. But IPv6 was quite different from IPv4 and had complexities that slowed down its adoption. So a practical short term solution was needed, and thereby Network Address Translation (NAT) was introduced.

The basic idea behind NAT is to assign a single IP address to a NAT device. We'll call this the public IP address. Within the local network behind the NAT device, every computing device gets assigned a private IP address as illustrated below: 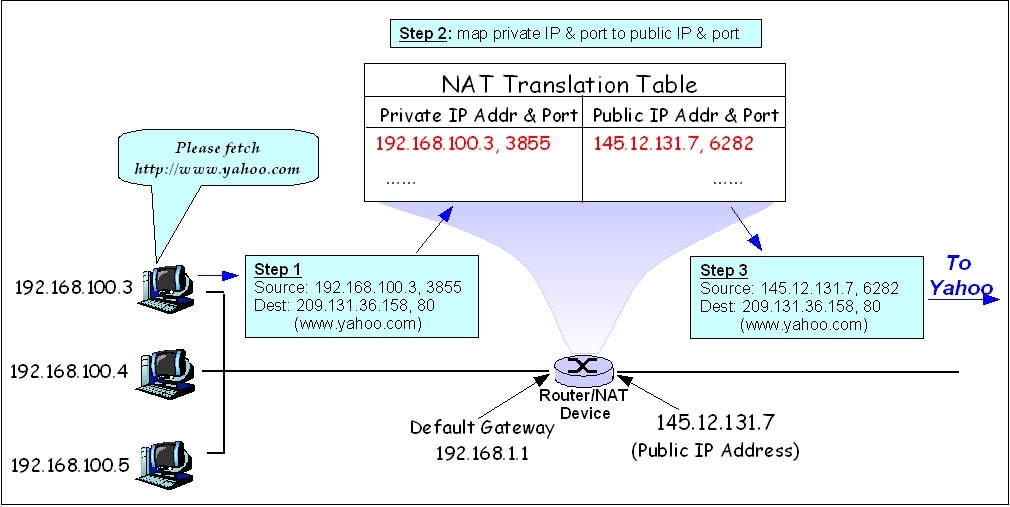 In step 1, the host at private IP address 192.168.100.3 is requesting the homepage of www.yahoo.com via an HTTP request through port 3855. When the HTTP packet arrives at the NAT device (step 2), it looks up the translation table for an existing public (IP addr, port) entry for this private (IP addr, port) combination. If no existing entry exists, then the NAT device will create a new public (IP addr, port) entry. If there is an existing entry, then the translation process will use the existing entry. Please remember that each entry in the translation table must always remain unique! After the table lookup is complete, the IP packet is then altered so that the new IP address and port replaces the old one. Finally in step 3, the altered packet is routed to www.yahoo.com . This entire network address translation process is completely transparent to the end hosts. In other words, neither the host at 192.168.100.3 nor the Yahoo web server realizes the packet has been changed.

The packet from Yahoo's web server now goes through the reverse translation process to reach the requesting host.

NATs are sometimes confused with proxies, but they are actually quite different in one aspect: transparency. NAT is completely transparent to the end hosts i.e. only the NAT device knows that an IP conversion is taking place. But for proxies, the source application/host is well aware of the change because it has to deliberately be configured to use the proxy.

Applications that holds their [private] IP address information inside data packets will find that it doesn't match with their actual IP address once the IP translation is done and the packet is on the Internet. Example: FTP

Among the chief complaints is that the widespread use of NAT has resulted in delayed deployment of IPv6, which is the more ideal long-term solution. Despite all the issues associated with NAT, it is still "good enough" for most home users. Therefore, adoption of IPv6 among DSL and cable Internet customers in the U.S. will continue to be slow. For Internet purists, the whole NAT solution is considered to be a quick "hack" rather than a long term solution. The original Internet was designed for end-to-end communication, where every host has a public IP address.